CBS News correspondent Dr. John Lapook has an important story about a Zika outbreak in the Rio Grande Valley, affecting 18 pregnant women in the area thus far in 2017.  Dr. Lapook interviewed the mother of adorable baby Hugo, pictured above, who said of her newborn, “I feel so happy, I’m so in love with him.”

Let’s hope that Dr. Lapook’s responsible, compassionate, human life-affirming approach to the challenge of the Zika virus inspires other journalists, news and opinion, to keep their eyes on the ball:  to fight the Zika virus, not the babies affected by it, by suggesting that their lives are somehow less valuable, less precious in the eyes of God than other babies.

Here is the link to the CBS story:

Two separate plea initiatives from concerned Catholics, lay and ordained, have emerged to challenge Pope Francis and his tragic course for the Catholic Church. Earlier in July, a letter was sent to the cardinals and patriarchs urging them to disregard much of the content of Pope Francis’ encyclical Amoris Laetitia.  Among the 45 signers of the letter were priests and seminary professors who wrote:

We request that the Cardinals and Patriarchs petition the Holy Father to condemn the errors listed in the document in a definitive and final manner, and to authoritatively state that Amoris Laetitia does not require any of them to be believed or considered as possibly true…

In addition to this positive sign of resistance to Pope Francis was a video produced by LifeSiteNews, featuring one bishop and 15 Catholic heads of pro-life organizations, all pleading with the pope to clarify his confusing statements.  The video is twenty-nine minutes long and well worth watching.  Most moving was the plea from Colleen Bayer, President of Family Life International, New Zealand.  In her message, Ms. Bayer gently says two crucial things to the pope.  First, she says that it’s not irresponsible to have more than two children, a reference to the pope’s infamous “breeding like rabbits remark.”  She then goes on tell the pope that she would love for him to meet her special needs children, including her child with Down Syndrome.

In the United States at least, the abortion rate for pre-born Down Syndrome babies hovers around 90 percent.  Couple that chilling statistic with the pope’s imprimatur for abortifascient birth control mechanisms to avoid having babies with Zika virus-related microcephaly and the urgency, and poignance, of Ms. Bayer’s plea comes into sharp relief.

As this video appeal comes from conservatives within the Catholic Church, the remarks from some of the video participants expressing alarm over the pope’s perceived concessions to the LGBT community – and they are wrong perceptions indeed – will not be welcomed by all, including me.  Nonetheless, the video is well worth viewing for all people who care about the sanctity of human life from the moment of conception, and who are rightly alarmed that Pope Francis is tilting the Catholic Church in a direction more in line with secular thinking on the subject of human conception: namely that life begins when human beings say so.

The only voice that would strategize to prevent the conception of this precious baby, and other babies born with microcephaly due to the Zika virus, is the voice of the Evil One.  These precious babies, just like all babies, bring a renewal of God’s promise of love and hope to humankind.  Only the spirit of Satan would cause anyone to doubt that fact of their reality.

Pray for the Catholic church under Pope Francis. Pray that her members will recognize the spirit of the Evil One when it is staring us in the face.

UPDATE 4/4/16: After Pope Francis made his outrageous remarks in February which intimated that the Zika virus, and its potential to cause microcephaly in infants, could justify the use of contraceptives, I scoured the Catholic press to find any criticism of the pope.  With the exception of one writer who highlighted the journalistic work of a grown woman born with microcephaly, I found no such criticism.  The lack of criticism begs the question: What is more chilling, the fact that we have a pope who will give his imprimatur to the evil impulse – yes, it is evil – to rid the world of “undesirables” by denying their very right to exist, or the fact that millions of Catholics share in that evil impulse to begin with.  It is the latter, of course.

Thankfully, Crux has now published an article taking to task Pope Francis, in part, for his despicable comments on contraception and the Zika virus.  The article can be found here:

Perhaps Pope Francis should ask, “Who Am I to Fudge?”

Lastly, to inject some Christian light and hope into this dark chapter in the Catholic church, I recommend a work from the world of fiction.  The BBC drama “Call the Midwife” aired in the U.S. on PBS stations is an artistic achievement, rich in Christian virtues.  Originally based on the memoirs of Jennifer Worth, an East London midwife in the 1950’s, the series is now in Season 5, with the plot lines coming from the writers and producers, yet all rooted in the spirit of the original memoir.  The premiere episode of Season 5 dealt with the subject of a severely deformed baby.  It is a must-see program. Though it is a work of fiction, the Christian message at the heart of it could not be a more timely counterweight to the evil and degrading ramblings of Pope Francis vis-a-vis infants born with deformities. At one point in the episode, a doctor, who had been resigned to let the baby girl pass away, hears her crying and says, “Yes, she wants to live!”

The writers and producers of “Call the Midwife,”beautifully aided by the outstanding cast, clearly get that babies born with deformities are equal children of God, with an equal right to life as any of the rest of us.

Let us hope and pray that the Catholic church will one day be led by a pope who likewise sees, from the heart, that babies born with deformities have a right to exist too.

And with greater earnestness, let us pray that the millions of Catholics who found mental sanctuary in the pope’s de facto imprimatur to avoid, at all costs, the conception of “undesirables” will have an authentic encounter with Christ, and change their hearts of stone to natural ones. The passing of Natalie Cole is shocking and sad beyond words.   The only thing I can say for now is that perhaps God decided to take Natalie home at the very dawn of a new year, precisely so we could reflect on the gifts He bestows upon us, even as our world deals with all manner of evil.  Natalie and her father were special gifts to our country, and indeed to the world.  Heartbreaking as Natalie’s passing is, reflecting and rejoicing over God’s immense gifts to humankind, like the talents of Natalie and Nat King Cole, is actually a blessed way to start off a new year.

Rest in peace, Natalie.  I love you.  I miss you already,  and I’m profoundly grateful that you shared not only your talent, but your beautiful heart, with the world.

Justices Scalia, Breyer, Alito, Kagan and Thomas chose not to attend Pope Francis’ address before Congress. The four other justices, Roberts, Kennedy, Ginsburg, and one of my favorite people in the world, Sonia Sotomayor, did attend.

So far, no overarching theory has emerged as to this latest 5-4 Supreme Court split, and there may never be.  Given the make up of the split, coming up with a theory would be difficult.

Scalia, a Catholic father of nine, could not have been too thrilled with Pope Francis’ reprehensible comments from earlier this year that Catholics need not breed like rabbits.  I’d like to think that his four colleagues, including Kagan and Breyer, had the wisdom to see that no matter what our philosophical differences may be in the course of this life, there is never, ever an excuse to condescend other people’s families, and that their absence was a sign of solidarity of sorts with Scalia.

I’d also like to think that the four justices who did attend, including my favorite, Sotomayor, and who heard Pope Francis use his platform in our U.S. Congress to clearly condescend same-sex parented families, which he did at the close of the speech, will realize that investing in a person – including a basic investment of one’s time – who obviously feels entitled to condescend other people’s families does nothing for the good of democracy and our Constitution, and even less for the spiritual well-being of all. 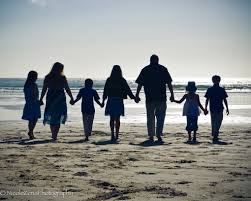 In yet another airplane interview, Pope Francis said to reporters and the entire world that “Catholics don’t need to breed like rabbits.”

Simply put, there are no words to adequately describe the heartlessness of that statement, no matter how he or his legions of yes-men may try to contextualize it.

So to all the big, beautiful and loving families of this world, whatever your creed, I say thank you for bringing love into the world.  Each conceived soul is a gift from God, not an economic asset or liability on Pope Francis’ or Planned Parenthood’s spreadsheets.

One day people will see that.  Until then, we must keep our hope alive, and rejoice in the love that does exist in this world,  expressed in so many ways, including by parents whose hearts are filled with joy and excitement with the addition of each new child in the family.

They were men whose lives were cut short, and were doubtless some of the most hated people in the world, serving in the army of what is now one of the most hated countries in the world: Israel. Yet at this time of year-end reflections and media selections for “Persons of the Year,” this dissident blogger chooses a group of men whose loss I not only mourn, just as I do the loss of the far greater number of Palestinians, but who have won my total respect: the fallen soldiers of the IDF of 2014.

One need not offer a political blessing to the so-called “Operation Protective Edge,” which resulted in the deaths of nearly 2,200 Palestinians, mostly civilians, or for that matter offer one’s blessing to the current Israeli government’s broader military defense posture – I certainly do not – in order to appreciate the contributions these beautiful fallen men have made, not only to their country, the only Jewish state in the world, but to the basic decency of modern nation-states.

When nations send their young adults off to war, and those people are killed in war, it is right, and should be normal, that the nation grieves the loss of those young lives. To do the opposite – to not grieve as a nation – is to reduce those lives to mere cannon fodder. That, in a word, is ungodly.